You roll the paper roses like you would for quilling. I also used McGills Paper Punches for the leafs and for dimension, I ran them through my quilling crimper.
Unfortunately the paper I used for the rolled roses by DCWV made by Provo (The Christmas 180 Stack), perhaps a brand from Joann's, not sure though. was not double sided.
I did not notice until I began cutting it. It was on sale for $9.99 at Joann's.
Although it's very pretty paper, I had to end up painting as well as I could the white on the back of the paper after I had the roses rolled and on the Bookboard. This was time consuming and hard to do.
I like the bookboard better then the styrofoam, it's eco friendly and works better with paper flowers I think. However my daughter says she wishes she would have used the styrofoam wreath form for her paper flower wreath we made together found here. Flower Shape Rolled Rose from Silhouette Cameo's Website can be found here.

After I rolled lots of roses I began gluing and arranging them onto the bookboard. I think it turned out really pretty using the Christmas paper. The only thing I would do next time if using only the one sided designed card stock paper is paint the back of the paper first with some water color very lightly. I like the lighter weight paper though it was nice for this project.

I think this wreath looks better in person, but some things are just like that. Next I want to make gift tags for the Christmas. 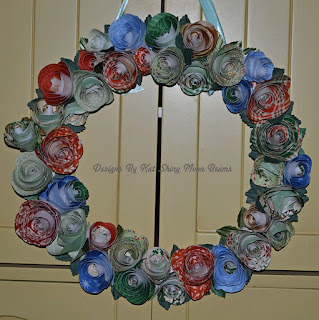 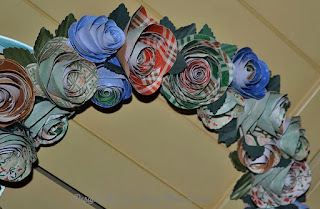 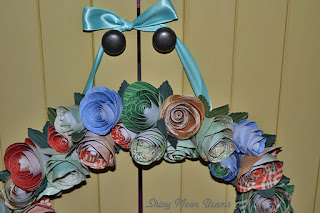 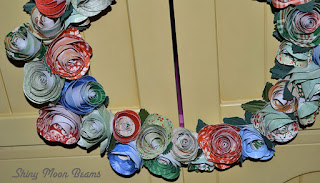 Another fun craft with my Silhouette Cameo!