Shoot for the Moon! Full Moon - Taking Photos of the Moon with my Nikon D3100 Camera

I am always trying to expand my usage of my Nikon D3100 Camera. Today I wanted to photograph the full moon. After I photographed the moon,  I checked out my photos I took and I realized I had no idea what to expect of the photo my camera should take using my regular lenses.
Well what I got is the exact thing I saw with my own eyes, the moon lit up bright like a big flash bulb in the sky. But when I went online to see what other photos were being taken by  people of the moon, well these people actually had great photos of close ups of the moon. I was very disbelieving that that can be done with a camera, or at least my camera anyway.
I was super curious so I ran to get my 200x zoom lenses and put that on right quick and ran out onto the patio to take the shot of the moon. The moon had moved to strait over my head. I didn't want to fuss with the tripod so I just took several shots of the moon and they all turned out okay, but while I was taking them I was sure they weren't turning out at all. 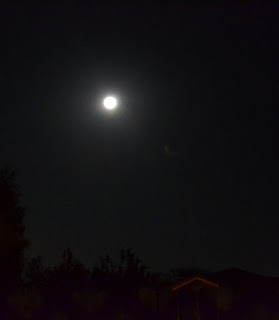 The first photo, just a flash of light in the sky
When I came back into the house I uploaded the shots I took to my computer into my iphoto and I cropped them and that is when I knew I had a some great shots of the moon! yay! 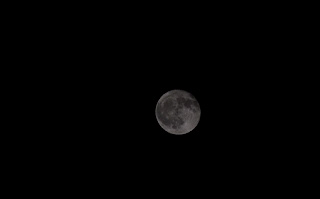 Second photo with zoom lenses 200x
I had went to these two websites to get some ideas on how to shoot photos of the moon. One is on a Flickr Group called appropriately "The Moon" and the other is on Ken Rockwell's website, although I was not able to find any information quick enough to figure out how to shoot photos of the moon on his website, I do want to go back again and cheek out his website, looks pretty interesting.  I was able to get some quick tips from the flickr group and that was a great help for me to get a shot of the full moon! I think it's pretty amazing that a 200x zoom lenses can give me a shot like this! Love it!!!

Email ThisBlogThis!Share to TwitterShare to FacebookShare to Pinterest
Labels: Photography, Photos, The Moon