I got a bit off track as to what I was going to crochet next. I thought I was going to do the wrap I talked about in the previous post or the coasters but then I found a cute Matrioshka Doll that I started, so I finished that instead yesterday. I got the pattern out of the Love of Crochet Magazine. I was pretty excited to see this doll pattern in there. I have a few patterns for a sewn Matrioshka Doll and even for my Silhouette Cameo. I used Patons Grace yarn to make this doll. I made some changes in the pattern to make it unique differing from the photo a bit in the magazine, though I kept the colors very similar as to what is shown. I am very fascinated with these dolls and plan to make them again with my sewing machine and using my Silhouette Cameo.
A Matrioshka is a Russian Nesting doll made from wood decreasing in size from large to small and the smaller ones are placed inside the larger ones, just like nesting boxes. The first ever doll was made in the 19th century by a folk art painter which is considered to be a  phenomenon in the world of folk art. In provincial Russia the name Matriona, Babushka Dolls, Stacking doll, Matrushka, Matrioshka, Matryoshka or Matriosha was a very popular female name associated with a mother with a large family. To this day Matrioshka symbolizes motherhood and fertility.
The traditional look of the doll is the outer layer being a woman dressed in a long strait traditional Russian jumper dress. Apparently the inner dolls can be of either sex male or female and the smallest doll is usually the baby made from one piece of wood. The doll is painted very intricately and detailed and usually follows a theme which varies normally using fairy tale characters or soviet leaders. 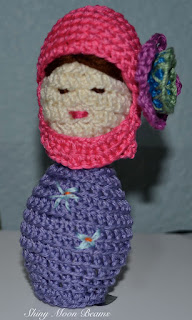 Have a very nice Presidents Day!