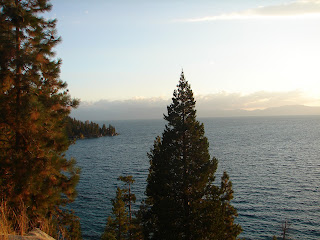 Lake Tahoe Sundown 2005
The weather is great, it's nice and warm and perhaps to warm so quickly. The snow capped mountains are prestigious in the sunlight after a long rainy cold March and the early April snow storms.
I remember when I was 15 years old I went on a back packing trip with my summer school science class up to the Sierra Mountains. There were about 22 of us and several chaperones if you could call them that....It was good for my parents that I was in the mood for behaving because those chaperones were not doing their job.
It was early July 1974. We washed our hair in the freezing water with Herbal Essence Shampoo, that was the most popular shampoo of that time. On our hot hikes we would stop at all the snow caps and grab handfuls of snow to suck on to cool us off, even though we were told not to eat the snow and especially pink snow, something about mosquitos nest perhaps? Each day we hiked to new camping spots, our daily hikes were about 1 to 2 miles sometimes more. The spots we hiked to were not accessible by vehicle and you would never see these magnificent treasures unless you hiked in.
If you got hurt forget you were a long way from help. Well as it happens Zachary one of my class mates broke his leg goofing off and two chaperones (oh no! not two!) were sent out to get help, leaving no one to watch over the teenagers. Soon a helicopter came to get Zack and I never saw him again until fall. To bad he was pretty cute and to think the year before he liked me, but I was not interested in him until the backpacking trip.
As a lover of nature this was a trip I will never forget. For fun in the evenings we would sit and embroider onto each others shorts and bell bottom jeans our names, flowers and other musings. Sometimes we would have to cross dangerous areas to get to where we wanted to go. I don't know how I made it through two weeks! but the fact I was able to get away from my parents and get credit for two classes sure helped. I took a lot of summer school classes not because I had to but because I wanted to get out of high school as soon as I got there. Once I found out that through summer school I could get extra credits I was all over that.
Yes how I love the Sierra Mountains and all the memories. Next week Steve is on Vacation so we plan on taking several day trips and maybe one over night trip. It's gonna be so good to get out in the beautiful weather and nature. We are going to check out the Pigeon Point Lighthouse halfway between San Francisco and Santa Cruz. Steve and I have nearly seen every lighthouse in Northern CA and several in Southern. I am keeping track and photographing each one. Last year we saw the lighthouse in Santa Cruz. We've actually seen it a lot of times only photographed it for the first time last year. Funny how you live near things and don't photograph them.


I played another joke on my husband today but it didn't work again. He is just getting to smart for his britches.


Have your little selves a happy week!
Proverbs 1:33
But all who listen to me will live in peace,
untroubled by fear of harm.”
~Kat