Last week on Tuesday we took our 2 hour drive to Pigeon Point Lighthouse off the coast of California HWY 1. We had to go through San Francisco to get there, there are other ways but that was the quickest route for us.
It was a beautiful day and wonderful day trip. We ate breakfast at Panera Bread we just had bagels. The tolls to cross the Oakland Bay Bridge and the Embarcadero were $12.00 for both ways, $6.00 in and $6.00 out. We were not hungry for lunch so we only stopped for coffee in Half Moon Bay and then hopped in the car and got back on the road.
I have not had a chance to upload and go through the San Francisco photos most of those were taken with the video camcorder. I will do those another time. We did not do anything in San Francisco we've been there a thousand times. We just wanted to beat the afternoon traffic so we headed home.

Oaky I will show off my photos with blurbs or stories along the way.

Pigeon Point Lighthouse where we went Whale watching and to see and photograph another lighthouse. 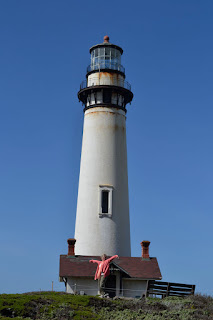 Steve told me to do that, throw my hands in the air I am standing on a hill in front of the lighthouse. 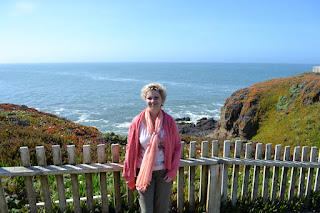 There are so many wonderful views right behind me is where the whales were that day. 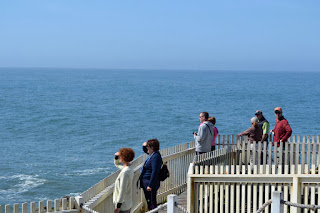 Everyone checking out the whales. 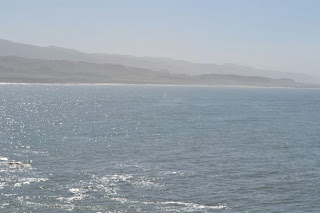 It is hard to photograph the wales, do you see the puff of water out there where the whale spots out water? that is the whale there were two of them. One photographer got a shot of one whale, I did not. They moved in closer and closer as time went by. 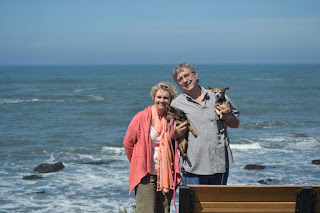 Steve and I set up the tripod and took our own scenery photos with the pups and us. 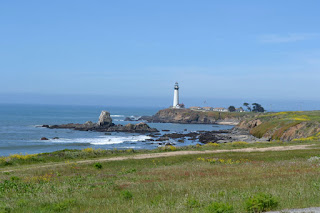 Here is my postcard shot!

On Wednesday we stayed home and worked in the yard. It is Steve's vacation he goes back to work next Wednesday.

On Thursday we left about 2pm to take our drive to Lake Tahoe and Carson City Nevada.
On the way we stopped and snapped our own photo at the chapel we were married at nearly 24 years ago in July. Chapel of the Bells. The Pastor came and asked if we wanted to renew our vows, I said no I don't want to jinx our vows we've already taken, he laughed. We were married on the California side of South Lake Tahoe. We stayed the night in Carson City Nevada, our gas was less for this trip $70.00 I think it's because we didn't have the awful traffic. 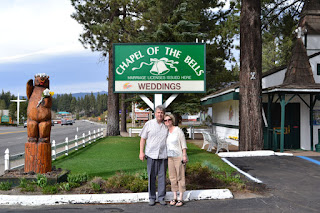 I had to get the wide view because the bear is so cute holding some white flowers. We've been up to Lake Tahoe more times then I can count and never stopped at the Chapel for photos. The day we were married there July 9th, 1988 a young man named Shane took our photos I thought that was cute since I have a son named Shane.

Here is the zoom in, same photo. 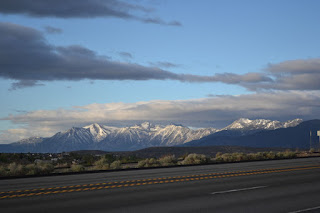 We stopped to take this photo on the way to Carson City it's so pretty. 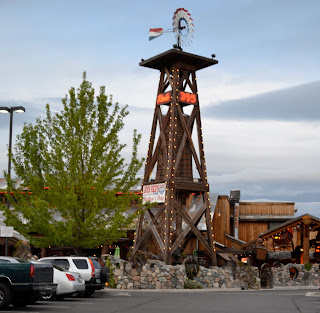 Here is our favorite place to eat and it's the best in Carson City Reds Old 395 Grill, we splurged on dinner and had steak. We always eat there when we are in Carson City.
We stayed at the Holiday Inn Express, it was very clean and they take pets. We had our two tiny pups, Edee and Effie. 6lbs each. 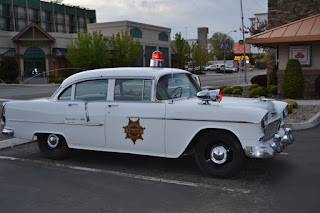 In Carson City we met two couples that stayed at the Holiday Inn and also ate at Reds Old Grill as well, the two couples were together and on their way to Virginia City, which is a fun Western City. They were having a car show there for old cars. This guy turned on his lights for me. Later he told Steve he should have let me sit in the car and handcuff me for fun photos. I was busy in the Holiday Inn when Steve talked to him again so I didn't know I could have had such fun photos. 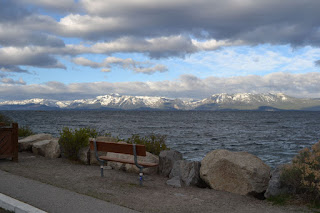 In the morning when the sun is just trying to come out a photo of Lake Tahoe on the way home. 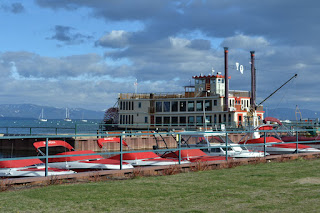 Another beautiful photo in Lake Tahoe on the way home.

Last night I tried to photograph the super moon but I didn't get a good shot. I have before taken full moon shots. Last night it didn't happen for me.

Today I am off to see my son Shane. Have a wonderful week!