A few weeks ago Steve came home from working on pops truck with some cabinets from his pops shop. Pop makes custom cabinets. Apparently the customer changed their minds and wanted something different, so he gave them to Steve. Steve had no idea what he would do with them but thought our neighbor might want them, so he brought them home. Our neighbor didn't want them. I asked Steve what are you going to do with these cabinets? he said he didn't know.


Everyday I went out to the garage to look at them wondering if there was a way to turn the cabinets into a craft table and get rid of this ugly corner desk in my craft room presently. I never have any room to craft, my desk is the sewing table which is to small to sew on and my old corner desk was to hard to craft on. It was frustrating.


I didn't say anything to him just went out there daily and stared at them. Last weekend I asked him if he could make me a craft table with one of the cabinets. They were kind of tall so he would have to cut them down so I could reach to sew and craft and build a table on the top of the cabinet that would extend out quite a ways for some room and would have to have some support on the opposite end.  The cabinet he got from pop was weird, it didn't have any shelves in it yet, and it had a roll out bottom drawer which I do like.


When I shared my idea with Steve he was like Tool man Tim, he got so excited! perfect I thought, because I didn't know if he would want to do this or not. I was happy he was up to the task. He is super creative with his hands. We went to the Home Depot which is one of his favorite stores, if not the favorite. He bought the white melamine for the top of the cabinet to match the cabinet pop had made. Then he told me about some Martha Stewart cubicle storage unit which I had never seen before. He bought that also, he bought two of them with the canvas storage cubes. All together it was about $175.00 for this makeover, and I went back yesterday to get some handles and a cart for the printer and scanner so that was another $30.00. Not bad, although I also picked up some really nice plastic containers for organizing your craft things so you can find them so that was another $50.00, see where I am going here. LOL! one things leads to another, but in the end $255.00 is not bad for the renovation of my craft room. And Steve had a lot of fun he said doing this. 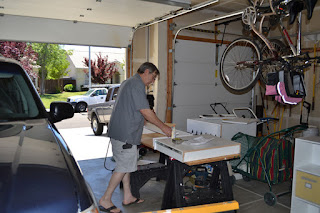 Steve modifying the cabinet, it was originally to be a bathroom cabinet, waste not want not. 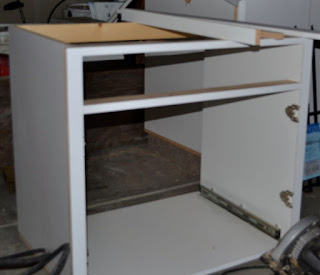 It does not reflect yet the drawers and roll out drawer and shelf and long craft table. 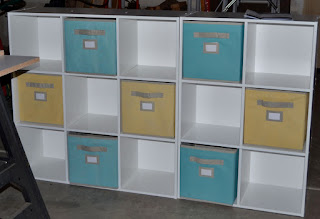 Here is the Martha Stewart cubicles Steve bought, what's funny is he knew about them apparently he had been wanting to revamp my craft room awhile ago. I am having a hard time with what to do with the canvas storage cubes, but I am getting there.

Before he could put everything in the room I had to take out half the stuff. I was also making curtains for the room to match my new theme, turquoise, blues and golds, greens with a hint of brown. Love it!!!!


So anyways I cannot show the photos of what it looks like yet because it looks a mess as I try to figure out how I want everything. I have seen many craft rooms with shelves on the wall but I didn't want that because it would be to hard to get to. I already store containers of some fabric on the upper shelves in my closet and in a drawer until as well in the closet. The closet is a mess right now, but that is next, it is functional just not as pretty as I would like it to look. I should be done this week and then next week I will post the before and after photos.


We were thinking about moving and renting out this house because the housing market sucks and we are stuck and cannot sell, we wanted to move up in the mountains but we decided to stay. Steve has put a lot of work into this house and gas is expensive. The drive for him would be 40 minutes to work from the town of Colfax where we want to move someday. A small cute town in the mountains not far from us.
We finally were able to get our house refinanced for a lower interest rate, it should go through in a few days and that will drop our house payment about $300.00 per month. We didn't qualify for any of the government options that are available which is fine. It's always better when you pay for things yourself, it's a sense of accomplishment and independence. We didn't quality anyway because our lender would have nothing to do with them. 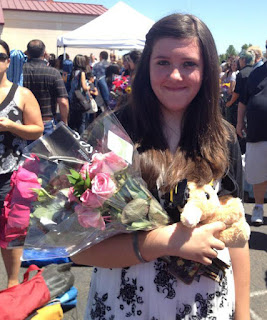 Morgan graduated from the 8th grade on a hot day with no shade for parents or students, wew I am glad that is over, we are so proud of her.

Have a great weekend.