Wow I can't believe I haven't posted since last week. I have been busy as a bee. Here are some pretty Hydrangea from my garden. They actually are not as pretty as they should be, they don't seem to do well here in my soil and the place of which they are planted in my garden.
I posted my Suns Collection right before this post. 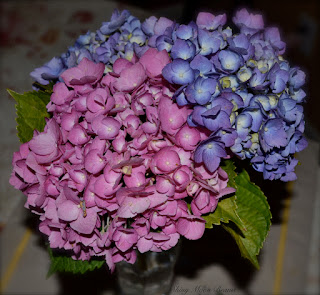 I have several new cards I made I will show off later. I made them for my friend Mary Grace in Italy. She is sending me a painting she made, it's a beautiful painting of sunflowers. She does not have a blog.

I also made two vases full of felt flowers, I have to go to Joann's an get some more pipe cleaners to use as stems. I made a video on how to make them but I don't have time to post it just yet.
I am also halfway done making a crochet zigzag quilt.

There has been a horrible fire in Placer County where we live for about a week and 2000 firefighters were trying to put it out. It was so smokey mostly in the morning. Our area was never in any danger.
It was in the 100's when it started and then it cooled off to 75 degrees and today it's back up in the 80's.
We are all over the place when it comes to temperatures. I heard we are going to get tropical weather tomorrow.

Steve got a shot in his knee I think it is cortisone. He had to see a specialist and they are not sure what is wrong with it yet but have decided it is one of two things. He may be facing surgery up the road, but it won't be major.

Funny thing, on Tuesday which was Steve's day off he wanted to go to the movies, I said okay and I went to get ready. We decided we would pick up Pizza from Mary's Pizza on the way home. The movie MoonRise Kingdom. Since I was running around trying to get ready for the movie before it started I didn't ask what it was about. When the movie started I saw that is was about cub scouts I was so mad at my husband, but I didn't tell him that. He said to me because it was slow at first we could go, He didn't like the movie either. Well we stayed and it did get better and it is a very cute movie.
Here is the synopses.
Set on an island off the coast of New England in the summer of 1965, two twelve-year-olds fall in love, make a secret pact, and run away together into the wilderness. As various authorities try to hunt them down, a violent storm is brewing off-shore -- and the peaceful island community is turned upside down in more ways than anyone can handle.
Anyway it's a cute movie but the beginning of the movie starts out strange.
I did forgive Steve for taking me to see a quirky movie. I ended up loving it and the pizza was good and the company was not bad either.

Have a wonderful summer day1