I love these beautiful vases I went shopping for yesterday. I already had the tall aqua teal that I had purchased from Target in June when we did my craft room update. The day I purchased the vase Target had three sizes, the tall one I have and a baby one that I just bought and a mid size one that they were out of darn it! I will try to look at the Target near my sons house.
Yesterday I bought the baby aqua teal one as as I mentioned above and also found the gold rust one, it's pretty cute also.
I next went to TJMax and found the purple one and dark teal green vase. I bought the purple one for my daughter in law for her birthday and one for Kirsten in dark teal green for her birthday. My daughters house is decorated in teal.
They both have birthdays coming up and they liked the flowers that I made for mine, so it will be a great gift. The vases from TJMax were a great bargain. The ones at Target were a good price as well, just not as cheap as TJMax.
I decided to not make Jaime a purse for her birthday and I am going to make her a Country Western handstamped necklace and make the the flowers to put in the vase. I have 6 birthdays coming up in the next 40 days. One is for Kirsten's step son I bought him a little microphone and that will be his one gift. Now I have so many to buy for their gifts will be on lighter side, which is fine because many times you buy so much and it's a waste. I did buy my daughter a lot of things which may cause some jealousy since I am giving a party for everyone at the end of July. But she is my daughter...and I can't resist. I am not sue what I am going to do about that I might have to give them to her before the party because I don't want anyone to be mad. But I bought some extra things because I kept finding cute things for her. 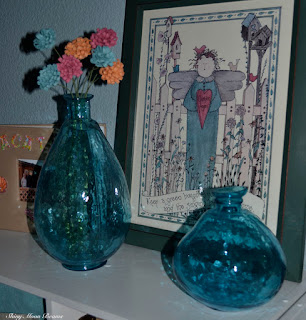 Here is the vase I purchase in June and the new baby one I am keeping since it matches the first tall one I purchased. I need to find the medium size vase now that will match. 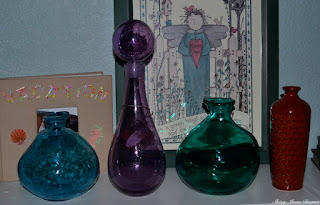 Here are the four of five vases I purchased yesterday got them all for under $30.00 another  I purchased is not in the photo. 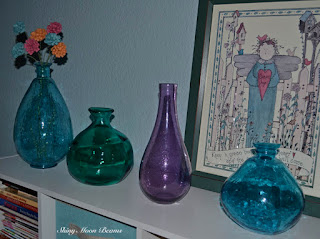 I tried to take a cool photo but the end one the short aqua teal vase didn't turn out and ruined my cool photo. It does not show the pretty texture in the glass, or whatever you would call that.

Today Steve goes for his MRI. Which will be good that is for his knee which is different from his hip pain from recent. He is falling apart. But he is dealing well with the pain which I am not good with pain at all.

Yesterday I made up some ice cream batter to put in the attachment for our kithenaide for homemade ice cream. I am making peach banana ice cream. It's the first time I have ever made ice cream in my life. Once I made it with eagle brand milk but that does not count. You cook this ice cream batter and it has to set for overnight before you put it in the kitcheaide. I guess some people use the old fashioned type that takes salt and you don't cook the batter and it has eggs in it. That sounds gross not cooking eggs not to mention the risk of salmonella. 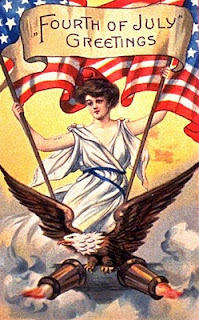 Happy 4th of July!
Have a great week!