Coloma California with the Family

I decided to move on tonight from this stalker woman on Etsy. I have created some outstanding designs this week and she can have the 4 wing beaded angels. I know if something does not sound right it is not right. But I don't want to be stuck on stupid and be like my dad was his whole life, he would not let things go. I have enough imagination to come up with something more beautiful and I did. The whole situation just makes me try harder and work harder this is suppose to be my positive blog.  She had another of my angels removed with her bogus document, (it is probably for one angel....maybe... but I doubt it, she would not show it to me). If it were I, I would gladly show it. Each design would require a new patent for each, she had three of mine removed from Etsy, but I still have them on my website, no proof... so I don't care what she does on Etsy my site is mine and I will not take them down without the proper proof.  which really would be a patent according to my brother. Did I say that already? I am so tired. I am not going to pursue it because I don't want to go and work for my attorney to pay off his work for me, it is just not that important to me, it just makes me angry don't want this bad energy.

I will reserve my energy for my family. Here is our trip to Coloma CA with half my family. Kirsten my daughter did not want my son, his wife and Morgan to come, she wanted to spend alone time with Steve and I. I was a little apprehensive about that, but since her husband is gone a lot I thought it to be okay. I am probably not popular with the DIL because she does not like to be left out of things, or my son I will do something with them perhaps on this Sunday we will see.

So here are my family photos of our day trip we had a great time. 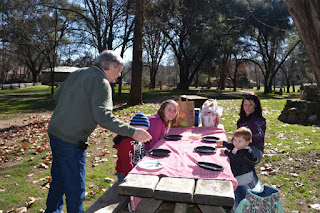 You know my husband is the greatest guy most of the time he is super sweet for a guy. Look at him passing out the Kentucky fried chicken to the kids and my daughter Kirsten.
I didn't eat that kind of chicken the original recipe I had the grilled and some green beans. 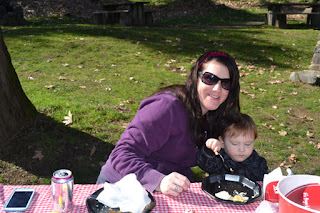 As you can see the park is gorgeous--Here is Kirsten with my grandson Rylan he is growing up so fast. Our little red head boy. My brother has a daughter Sarah who has bright red hair as did my mom when she was young. She married my dad he had dark hair and they had my brothers and I and we all had blond hair blue eyes, my eyes are blue and green. My mom had  brown eyes, my dad green, the Irish in him. 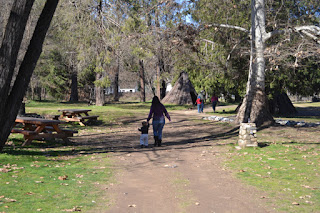 Here my daughter is walking with Rylan in the park as we are going to the Teepee and the kids and Steve are far ahead of her, Rylan is walking as fast as he can right now. 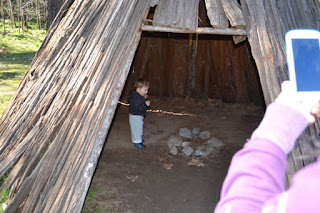 When Rylan saw the Teepee he was so excited! 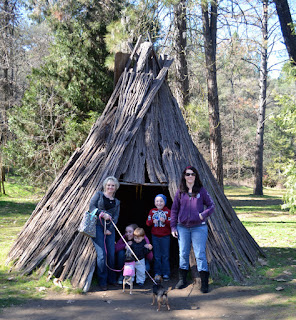 Here we are at the Teepee the kids loved it 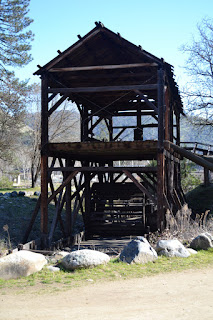 I forgot what this is called it slipped my mind I think it is called the logging ? oh well it will come to me. oh ya saw mill. 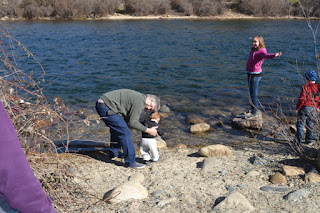 This is where they mined for gold in the american river 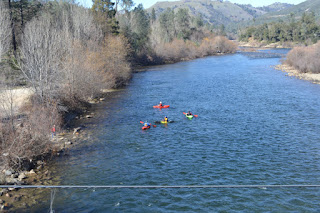 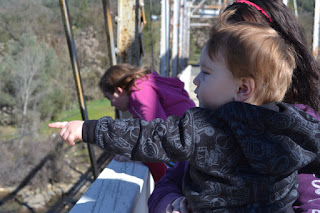 On the narrow bridge one car at at time in either direction, Rylan pointing at the Kayakers.
He has a black eye he fell a few days before 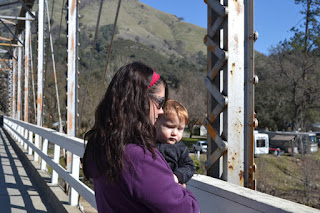 Kirsten with Rylan he loves his mommy 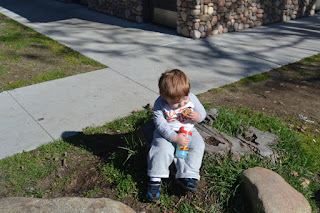 Rylan did not want anyone to hold his hand and they were not through exploring so I took him to the car while the kids and Steve explored and gave Rylan cookies, he is so interested in that cookie. 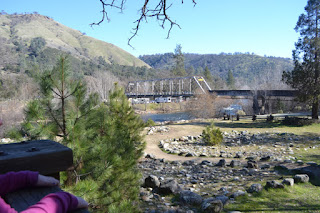 The bridge we were on looking out over the american river.

We were tired after out day and home we went and it was a nice Sunday drive. I have missed those this winter.

Have a wonderful Friday, I hope you had a nice Valentine's Day.