I've been a busy girl this week and I guess you can say bouncing here and there from one thing to another. I guess that is normal for me...LOL!

I made a card today but it's not cute anymore because I ruined it by touching the side of the tree with some copic markers, so then I tried to fix it by adding a shadow with the marker and it just looks awful. Although I look at it now it's not so bad, I just need to water color it to fix it or something. I mean... I love this card it was going to be a masterpiece! LOL! Lets see what I do with it this week. Maybe next time you come by it will be beautiful. Perhaps that will be a good challenge this week. 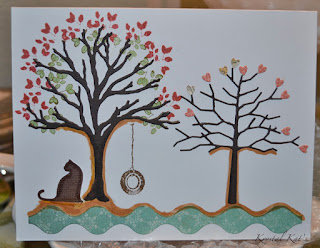 Tomorrow we are going for our ride to Coloma CA about 40 minutes away for a picnic with the kids, that will be nice.

I keep getting spammers at my blog, it is really pissing me off! I am losing my patience with the Internet today period!
Today on Etsy I got an email from a woman who apparently sells suncatchers on there as well and she wrote me a nasty email with most of it in caps saying (Yelling), she has a copyright to a beaded winged angel that has four beads on it, she used the term "quadruple". which is a better description, although I had not thought to call the angel a Quadruple Winged Angel because my focus was the rainbow. I made the angel to have 4 beads on each wing because there is seven colors in a rainbow. if I made the angel with just 7 colors in the wings that would be a lopsided angel so I added an extra bead using two different greens for the green part of the rainbow. Brilliant right! I know...he he...but apparently me thinking this way is stealing. Not!!
Here is the offending angel. She is a rainbow. I think it is cute. 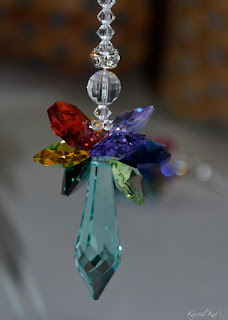 What a shocking thing for me to want to create rainbows right!... I am being sarcastic LOL!
She was threatening me and telling me I better take it down and on and on. The email was awful, rude and mean.
I have never seen her suncatachers before as I told her, and quite frankly I don't surf the Etsy to see what others are selling. I should for many reasons, but I don't because I don't have time and I enjoy coming up with my own ideas, don't really think I have a problem there. LOL again.
I mean look at me I am always creating something. Well I went to her site after she wrote me the mean threatening email and I checked out her stuff, sorry don't think my stuff looks like yours in any way. I have a lot of colorful creations, hers were not colorful at all and I found her suncatcher quite stark. Since she accused me of stealing her Quadruple winged angel idea I told her that I was not in love with her suncatchers and there was no ideas for me to steal. Good Grief Charlie Brown!

I mean I really cannot believe it that she actually told me I had to take down my angel suncatcher from Etsy and that she has a copyright to beaded quadruple winged angels! does she think I am that stupid?  Her emails were really nothing more than harassment as far as I am concerned so I told her so and I wrote Etsy and told them as well. She has threatened me that Etsy is going to remove my angel from their website. I guess we will see what we will see. I will believe it when I see it.
I spent the better part of a year schooling to get my Paralegal Diploma and worked for an attorney. I think I can see fraud, lying, threats and harassment all over this, not to mention bullying.
I am sorry she is jealous or perhaps in her mind she really does think someone is stealing her idea, but four beads on an angel wing...come on that is just ridiculous stuff.
I was reading on Etsy that this is quite a problem on there.... accusations flying around all over the place from one seller to another accusing them of stealing their ideas. That can really be very upsetting I have had it happen to me as well where someone has taken my very wording and wrote it for their adds. I am not even a great writer so it was quite the shock to me. LOL! I took it as quite the compliment. he he.
Okay off my soap box now.

I will keep you posted on if Etsy makes me take down my angel and then there will be feathers flying because I want to see this copyright!