I have not posted in awhile about my crystal rainbow sun catchers!

My shopping cart on my website Krystal Kat's is not up and running anymore, but I still sell my crafts on Etsy. My Etsy Shop is https://www.etsy.com/shop/KrystalKatsMoonBeams

I love angels and beautiful rainbows!
Here is one of beauties, you can find it at this link
https://www.etsy.com/listing/180727643/7-rainbow-baby-after-the-rainthe-rainbow?ref=shop_home_active_2
You can have the wings any color you want!
Check out all my sun catchers at the main link above and browse other angels as well.
https://www.etsy.com/shop/KrystalKatsMoonBeams?section_id=12102030&ref=shopsection_leftnav_1 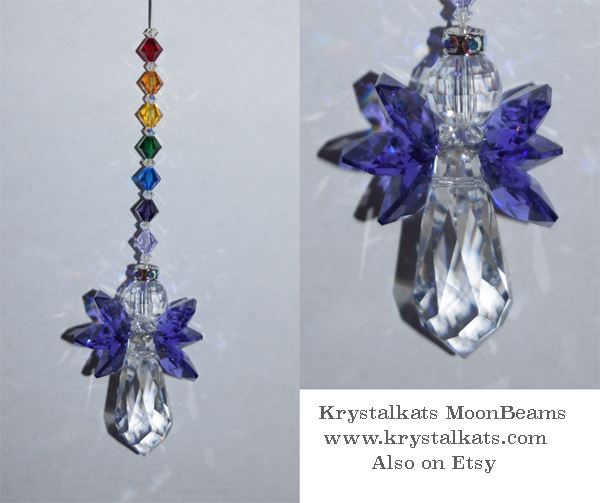 Enjoy the beautiful rainbows that reflect off these beauties.

What is a rainbow baby? A rainbow baby is a baby who is born after a parent loses a child due to miscarriage, stillbirth or infant death. "It is understood that the beauty of a rainbow does not negate the ravages of any storm. When a rainbow appears, it does not mean that the storm never happened or that we are not still dealing with its aftermath. It means that something beautiful and full of light has appeared in the midst of the darkness and clouds. Storm clouds may still hover, but the rainbow provides a counter balance of color, energy and hope". 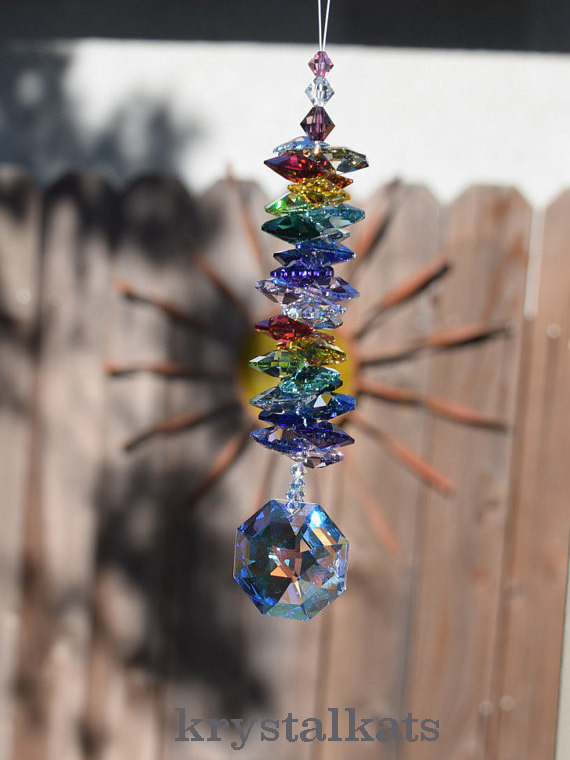 All my sun catchers are made with authentic Swarovski Crystals the finest in the world!

I finished sewing the top of my quilt together using the Super Sidekick, by Jaybird Quilts. I am so o o sick of cutting triangles. I think I would like to purchase more quilt dies from either Sizzix, or Accuquilt. I have several Sizzix Die Cutting machines, and one Fiskars, Fuse Creativity System. Any of these cut the go quilting dies. But I did not have a triangle. So I had to cut by hand. I had thought about using the apple core, I do have, but changed my mind. I think now I should have just done that. But how can I say that when my quilt turned out so cute. 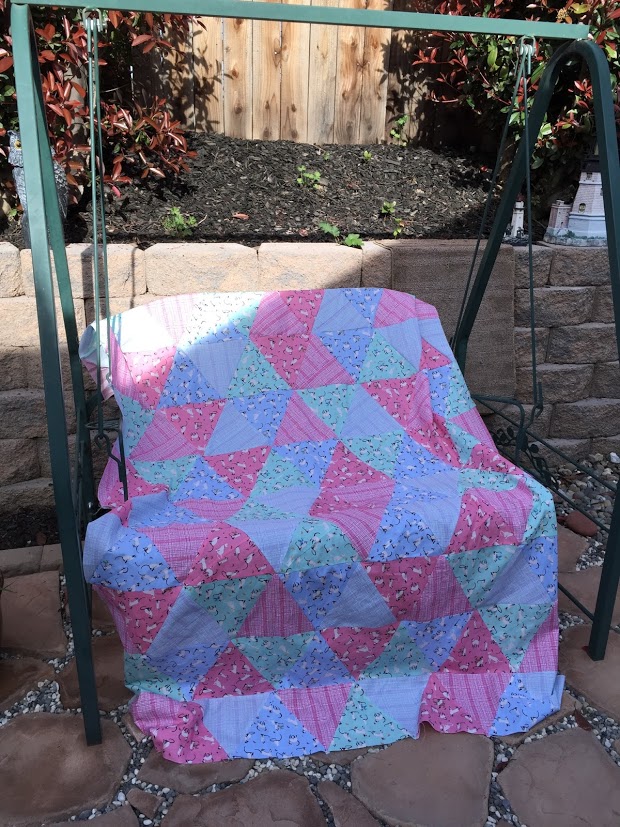 Wow, it is just hard to believe it is almost spring in 2015. Were is the year going already!

Today I am just going to share some photos.
In a few weeks, well on the 23rd I think it will be one year since our move. The house completely remodeled on the inside, and new windows, new exterior paint. So fresh and clean and new.
My husband has been working on redoing the backyard. So far it looks awesome, we are going to get some flowers to spruce it up now. He had a new patio put in and the rest he has done himself. Cute little spaces and to include a garden on each side of the yard. The yard is small. This weekend he will be making the rock patio larger because I am requesting it. He likes to make me happy, so he said yes he would do it. 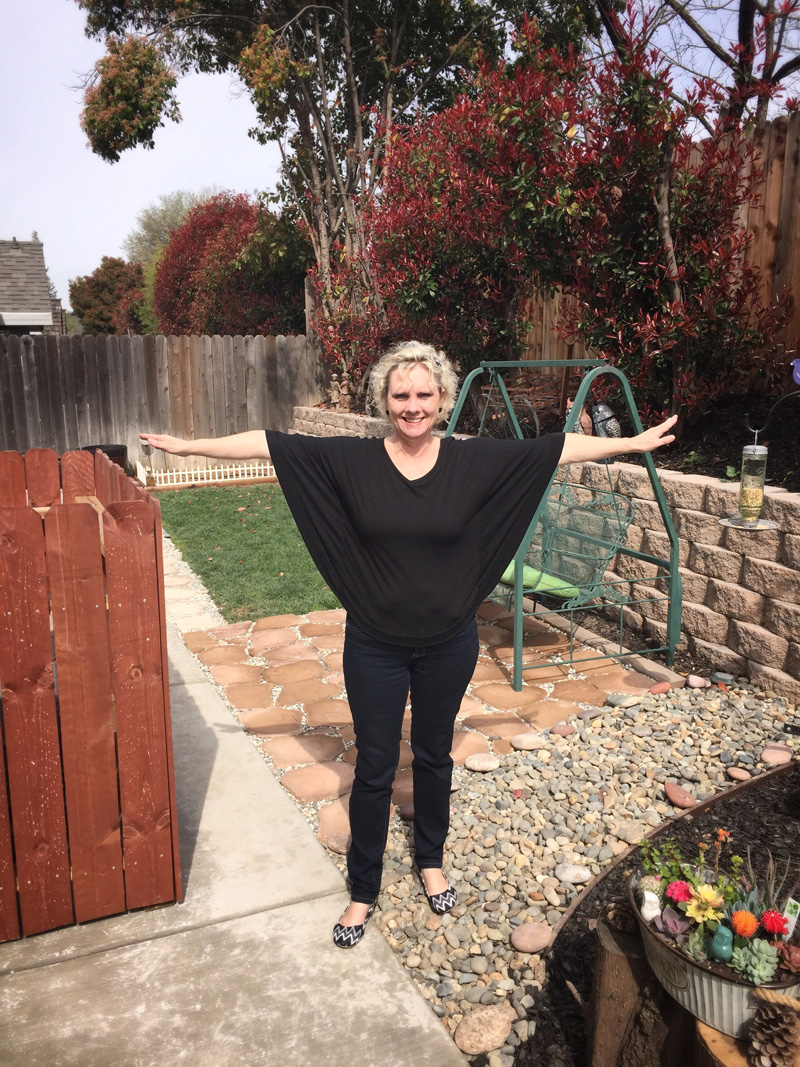 Here I am standing in the updated backyard, some say I am an angel others say a bat, but I could be a black butterfly! I don't want to be a bat. 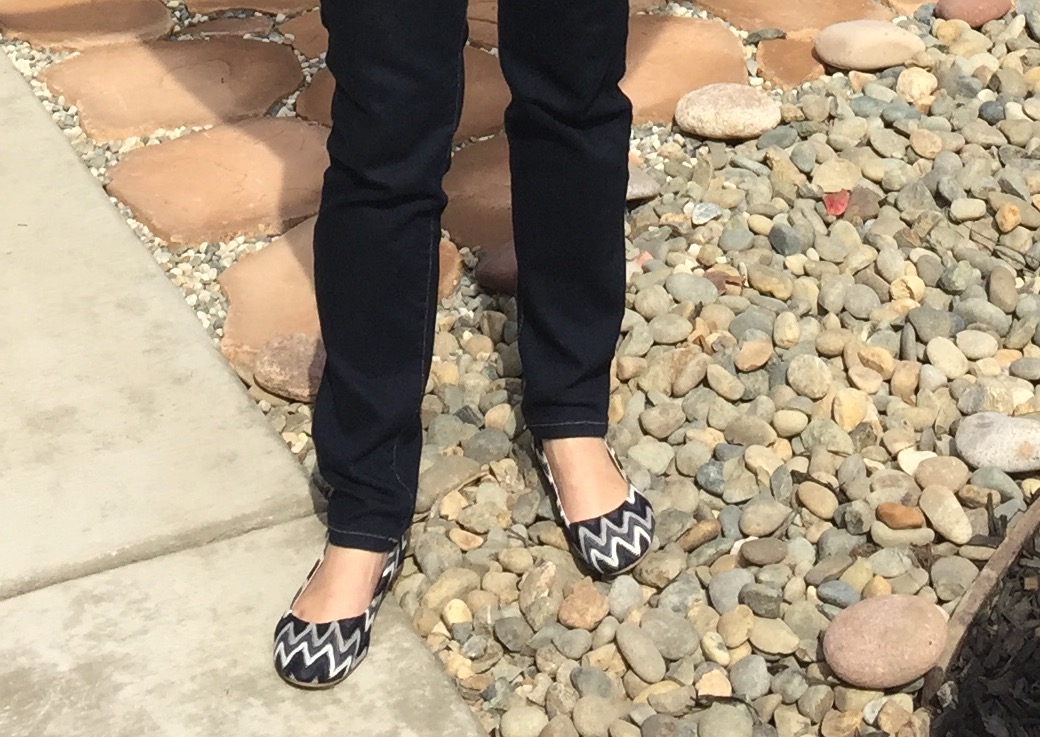 Cute shoes I got a few years ago at Kohl's. I never wore them until this year.

He has done everything except the patio. He put the retainer wall in, the rock paths and rock patio. The cement patio is brand new, which he wants to paint.
I was checking out the flowers. Here are some beautiful flowers at the store. I don't know which ones I want, so went home to think on it. 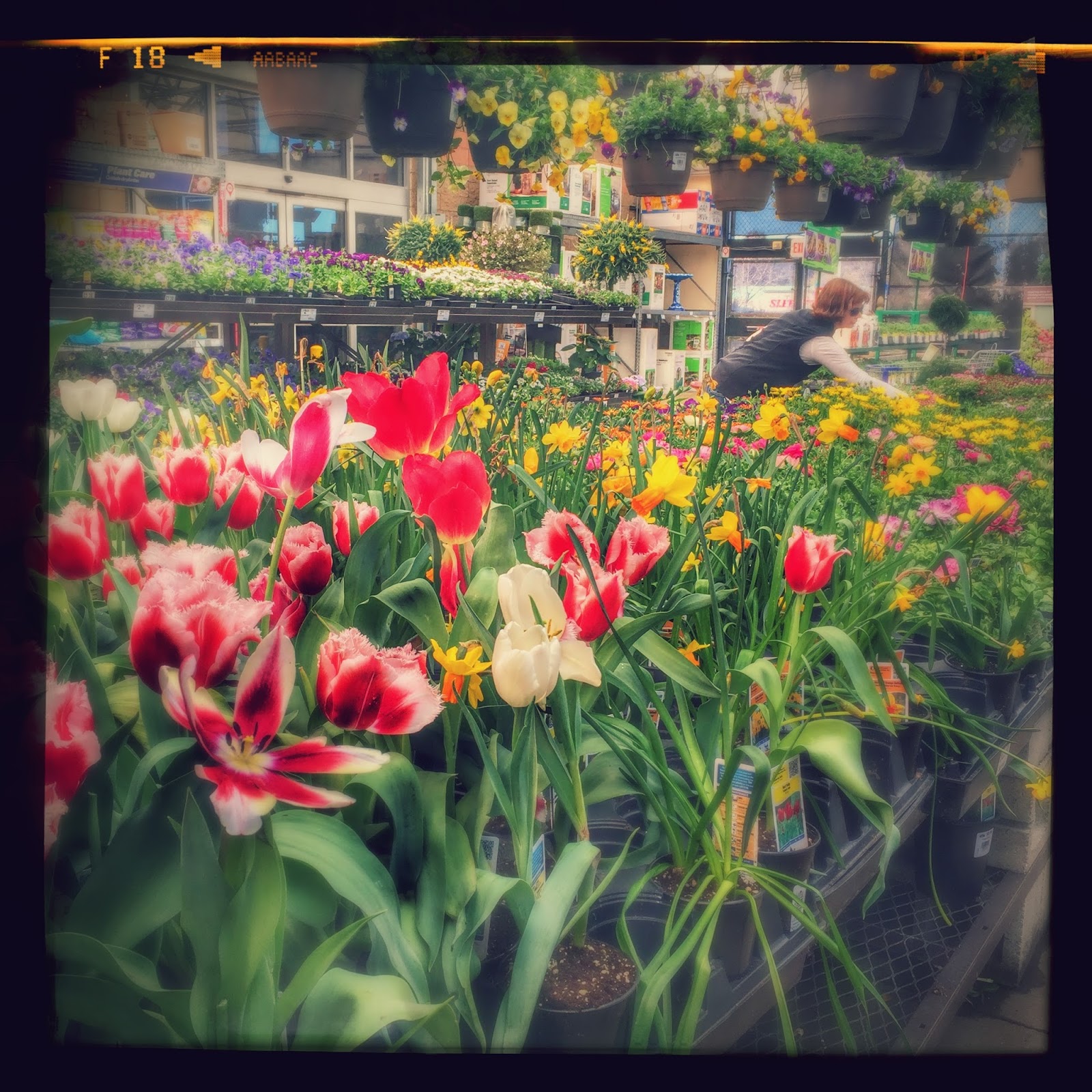 I made a healing garden using succulents and cactus and put them in this cute container I bought.
I was going through some things, and thought it would be nice to have a little garden to look at for reflection. Now I will have a bigger garden to look at very soon. 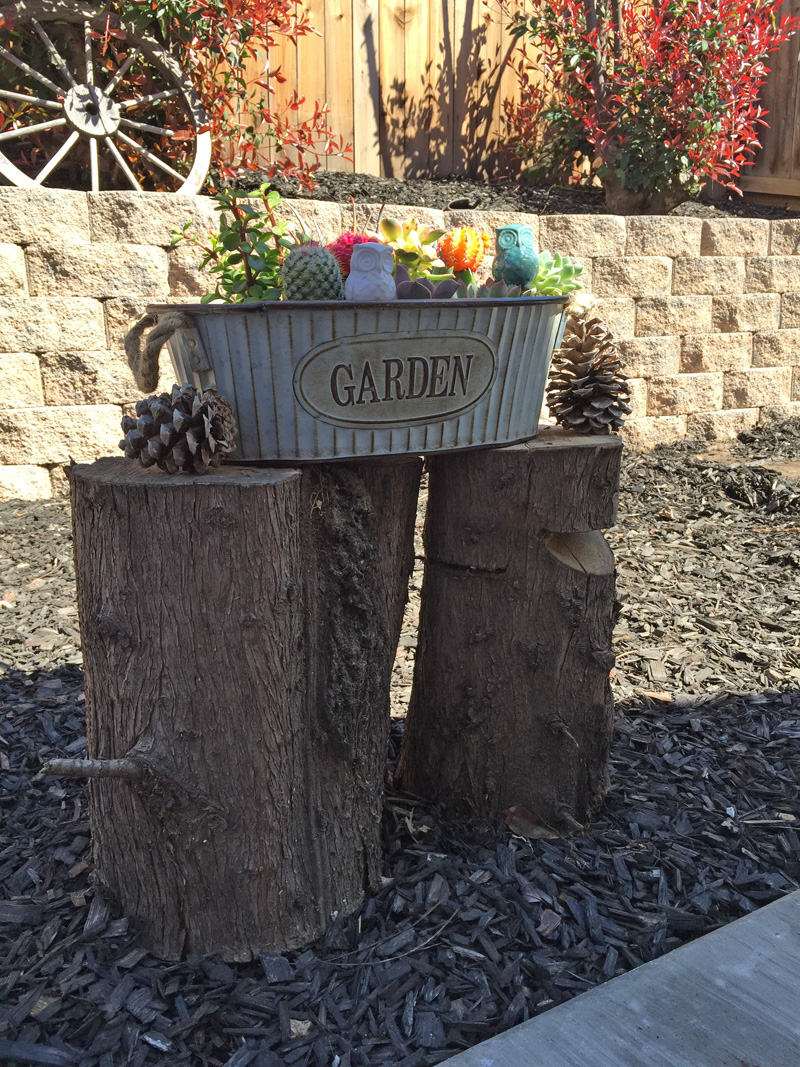 I put the healing garden on some stumps from a tree that was removed last year.

New patio and cute anorak chairs, love the colors. Cute does not have to be expensive, they are made from some kind of plastic material.

See the rock patio, we will be adding onto that this weekend! yay! I love it, it's so pretty. See where the bark is? that is being removed. I don't like bark.

This is the entire length of the yard. On this end is a small garden, will probably be a herb garden. On the other end Steve is making me a veggie garden. Right now you can't really see it. I love the rock path he made, that is super cute.

So those are the photos for our new backyard so far. After this gets all finished the hubs says he is putting in a patio cover.

Have a Happy Son Day!

I hope everyone is having a wonderful and blessed March so far! Spring has arrived to Northern CA early and it's beautiful. We need more rain though.


This past Saturday my son, his wife and my granddaughter Morgan went to Daffodil Hill in Volcano CA not far from Sacramento CA. It was a beautiful day. Spring is here.
This was a wonderful day trip, it's free to get in, you can leave a donation. Parking is free. It's a 1 hour 20 minute drive for us or maybe even less.

In 2005 10 years ago Morgan and I went to Daffodil Hill and so we have then and now photos. We sat on the very same log, but I cropped the photo a bit to much to see that. She was 6 then and is 16 now. Forget how old I was then and now. :) 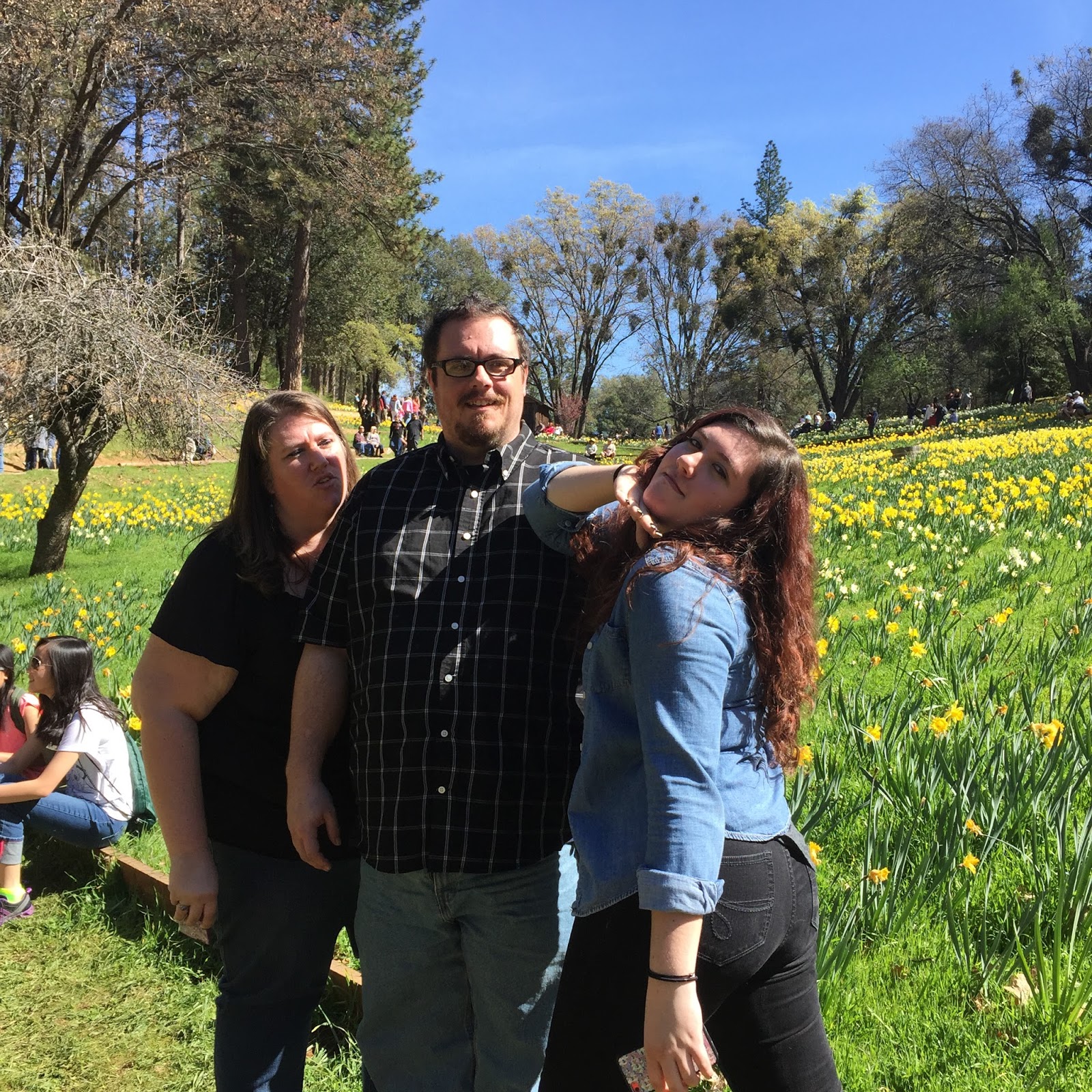 My DIL, my son and Morgan 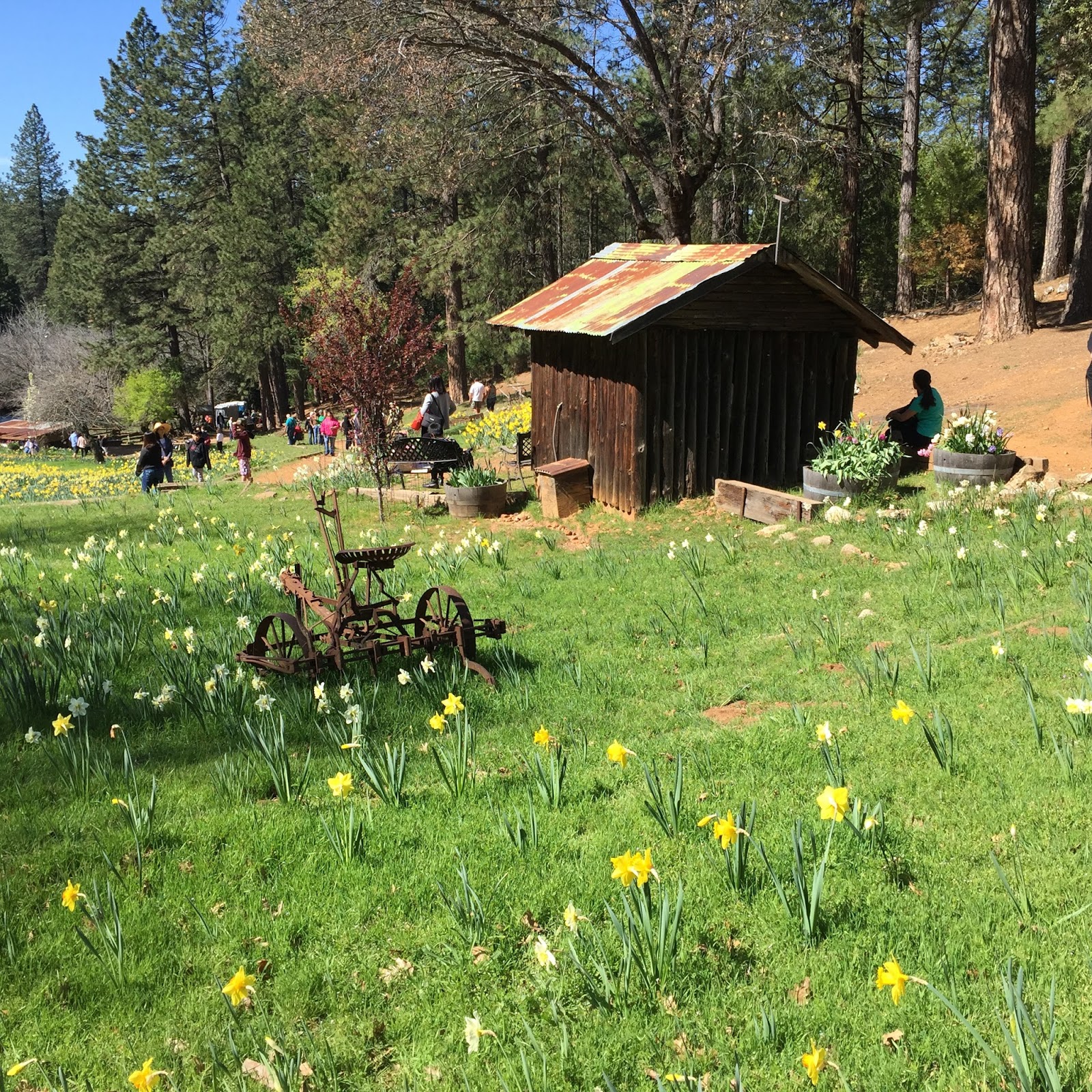 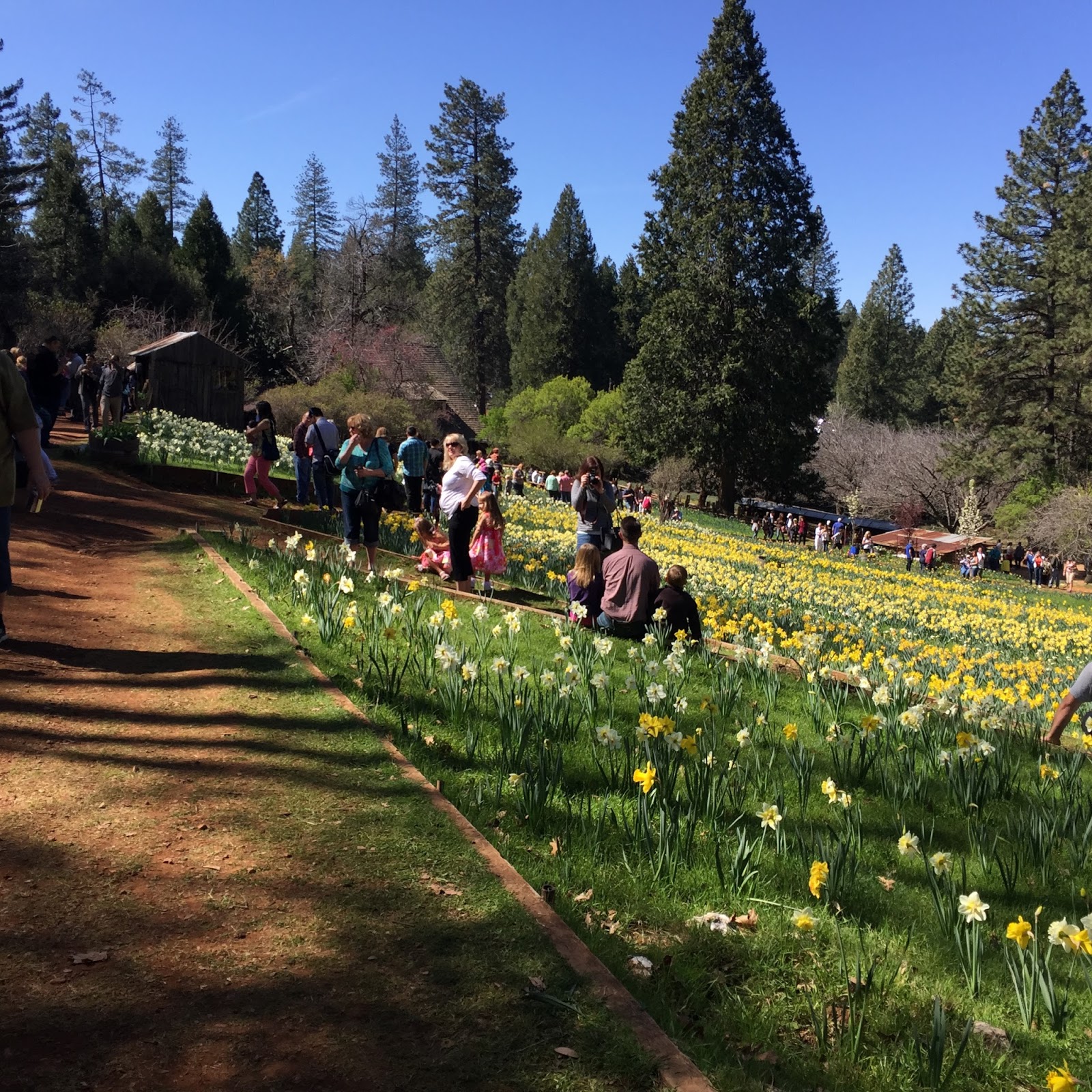 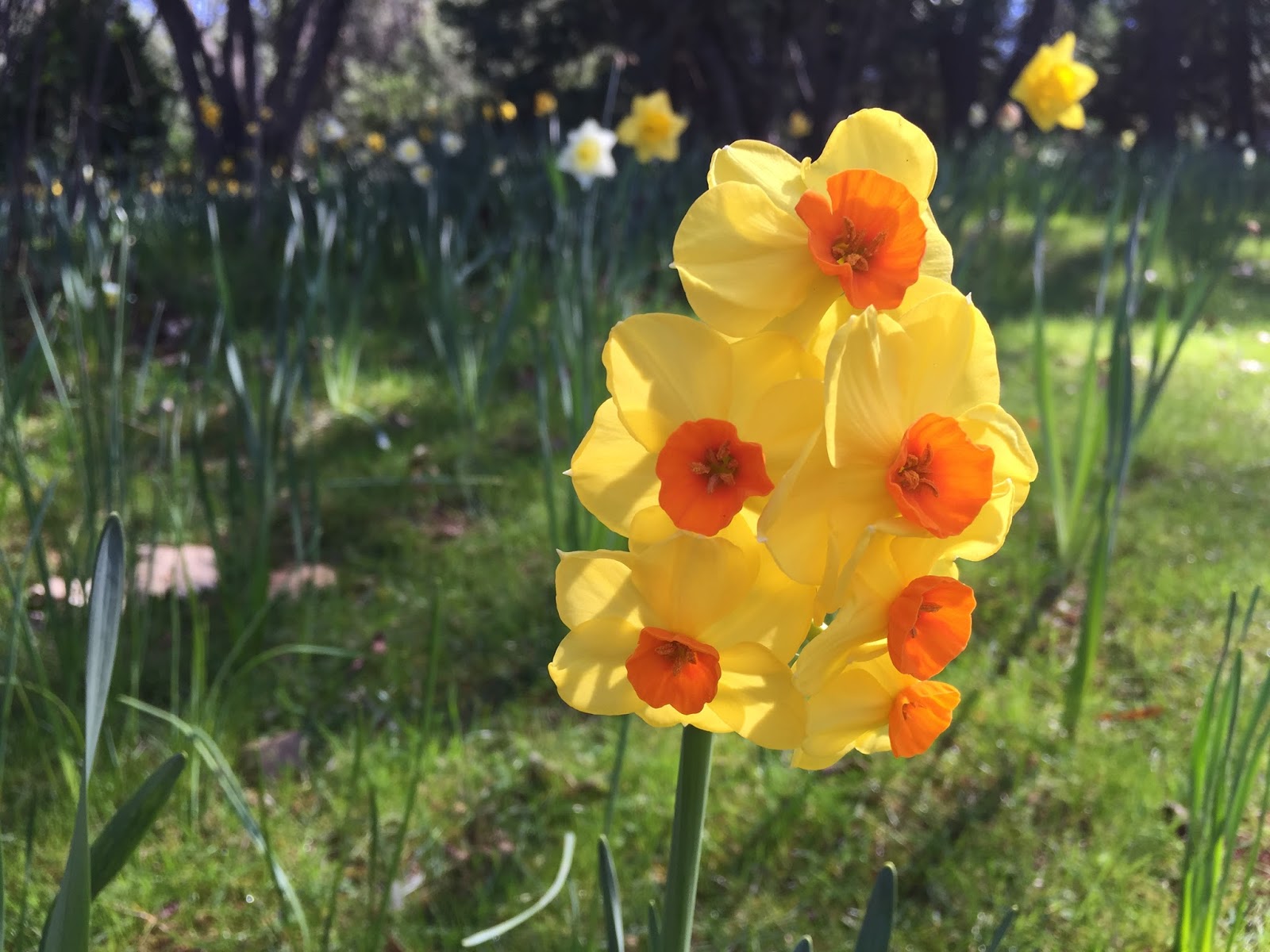 My favorite Daffodil that day

A few more photos this time from 2005 with mom and Morgan. 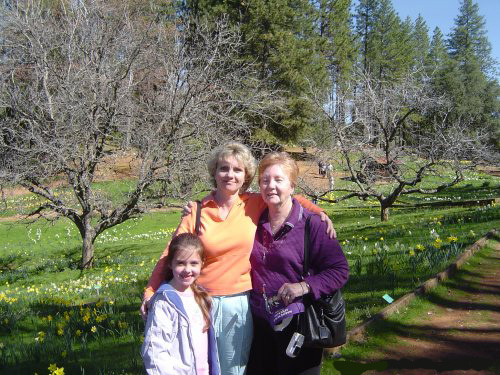 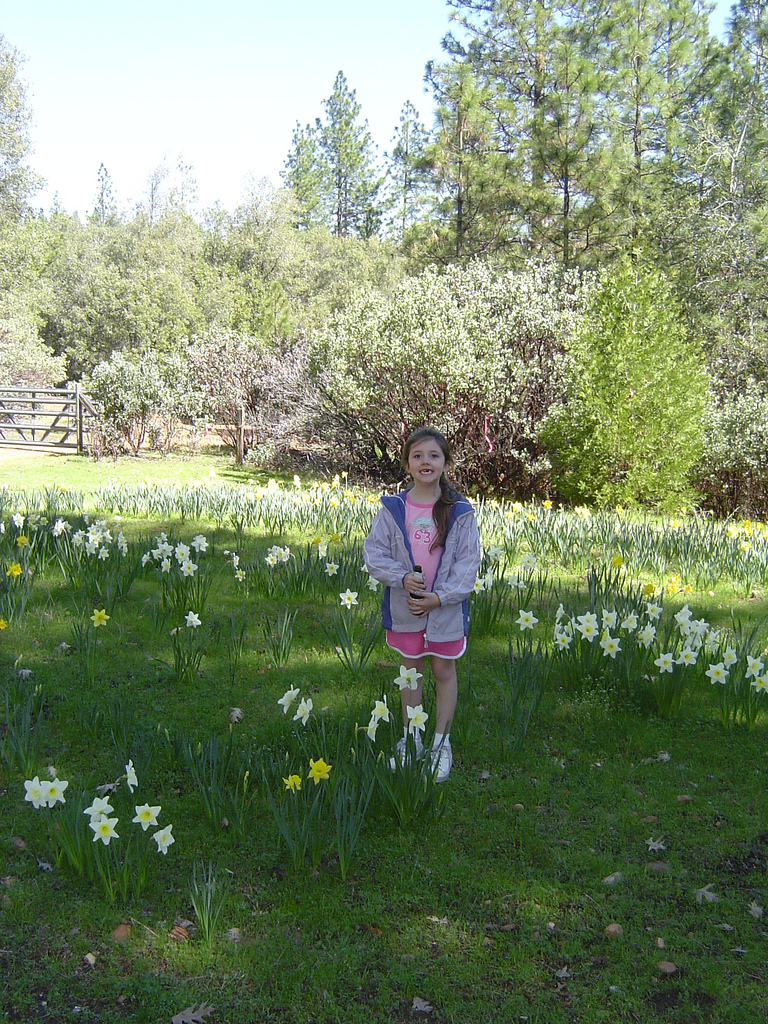 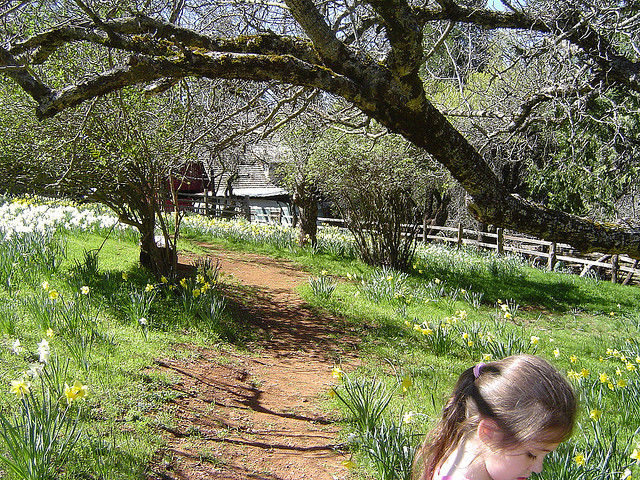 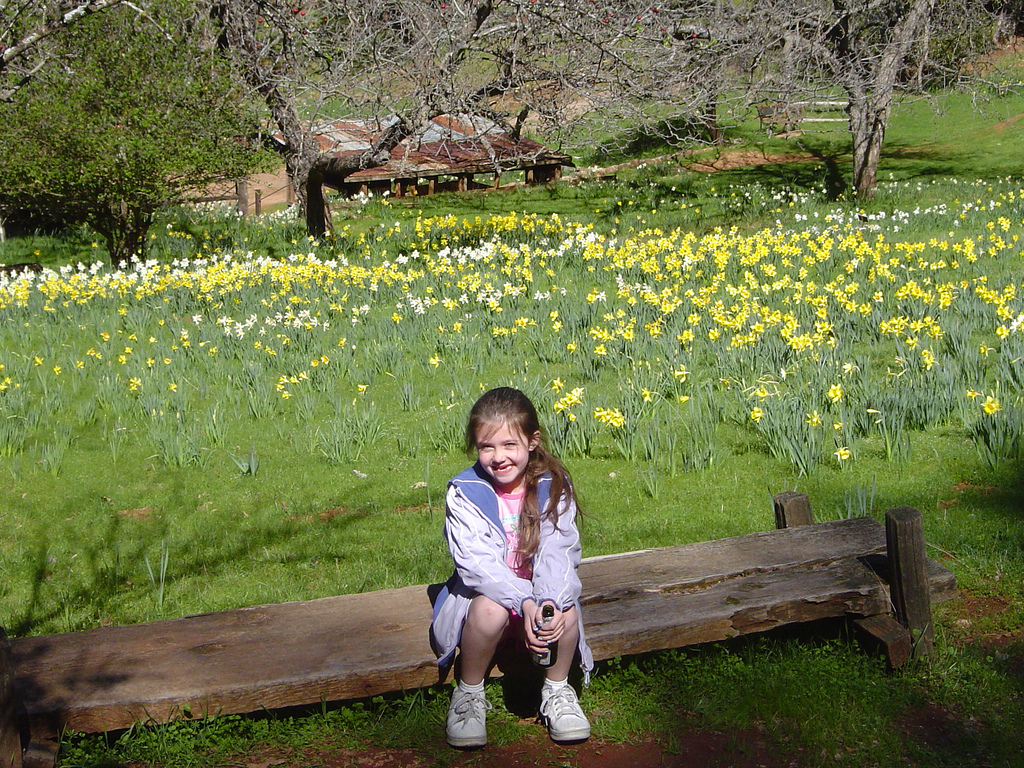 A Poem by William Wordsworth. How interesting his name goes along with his writing of poems.


Here is a poem by William Wordsworth.

Introduction (about the poem):• The inspiration for the poem came from a walk he took with his sister Dorothy around Glencoyne Bay, Ullswater, in the Lake District on April 15, 1802, came across a "long belt" of daffodils.• Written in 1804, it was first published in 1807 in Poems in Two Volumes, and a revised version, the more commonly known, was released in 1815.• It consists of four six-line stanzas, in iambic tetrameter and an ABABCC rhyme scheme.• Well known, and often anthologized, "I Wandered Lonely as a Cloud" is commonly seen as a classic of English romanticism within poetry.

William Wordsworth, 1770 - 1850
I wandered lonely as a cloud
That floats on high o’er vales and hills,
When all at once I saw a crowd,
A host, of golden daffodils;
Beside the lake, beneath the trees,
Fluttering and dancing in the breeze.

Continuous as the stars that shine
And twinkle on the Milky Way,
They stretched in never-ending line
Along the margin of a bay:
Ten thousand saw I at a glance,
Tossing their heads in sprightly dance.

The waves beside them danced, but they
Out-did the sparkling waves in glee:
A Poet could not but be gay,
In such a jocund company:
I gazed—and gazed—but little thought
What wealth the show to me had brought:

For oft, when on my couch I lie
In vacant or in pensive mood,
They flash upon that inward eye
Which is the bliss of solitude;
And then my heart with pleasure fills,
And dances with the daffodils.
Jocund means cheerful and lighthearted.