I do believe it's going to be a fantastic year! better than it's been in awhile. However I would say that about every year. Some are just better than others...right?

At Christmas time, maybe a week before Christmas my fav girl besides my daughter went to paint. I must get my own painting supplies. I am really loving painting. So far I have painted with Steve twice, Morgan twice and Kirsten once. That means Steve and I have double paintings. Why do we need two of the same paintings. I put mine up and put his up on our bedroom wall. The one I did with Kirsten I put in my craft room, it's so funky (Funky Old Sacramento) it was just so fitting. Now this new one I did with Morgan I have put in my craft room as well. I need a bigger craft room. I won't get that, at least not anytime soon.

Morgan and I with our Painting 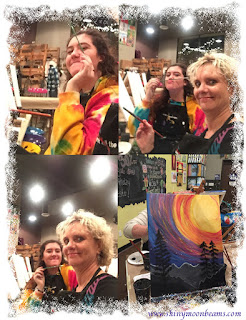 We did these paintings at "The Painted" in Folsom CA
The one I linked to is theirs and the one in the photo above is mine. I didn't show Morgan's, but instead put all her silly faces in the photos above. I am having a mental block, it's not a photo cube, but, it is that, but I know it has a more popular name. I am just stumped as to what it is. LOL! My excuse will be I live with my 84 year old mother. She just had her 84th birthday and is doing pretty good.

It's so cold, my feet are freezing. We have been having so much rain in Northern CA. Gees. We go from one extreme to another. Last year it was a drought, actually the last few years. Now we've been raining cats and dogs. When the snow melts this year, it's going to really send down a lot of water. We are already having flooding. I can't say what is happening in Southern CA since I don't live there. I really don't pay attention to their weather. It is like we live in another state. Such a different culture really and weather.

This year Steve will probably need another surgery on his knee, we will find out this next week. It's to bad he cannot retire early. I don't know what the future holds in that area, but I know God is in control of all things.
My son, Steve, Morgan and DIL have all been very sick with a horrid flu. Steve and Shane had the flu shot. Shane had to because he works in a hospital updating software. Which is nice because he has excellent healthcare. Morgan and DIL did not get the flu shot. Morgan also has tonsillitis.

I would love to add to my list this year taking a creative writing class, but I would also need English. I am not nearly as good as I should be, well actually I am terrible. But for me as much as I want to do that this year, art is my passion and it's hard to fit in the the school. It's nice you can do it online now a days and it's something to think about.

Have a super wonderful weekend